The decline, and revival, of the osprey 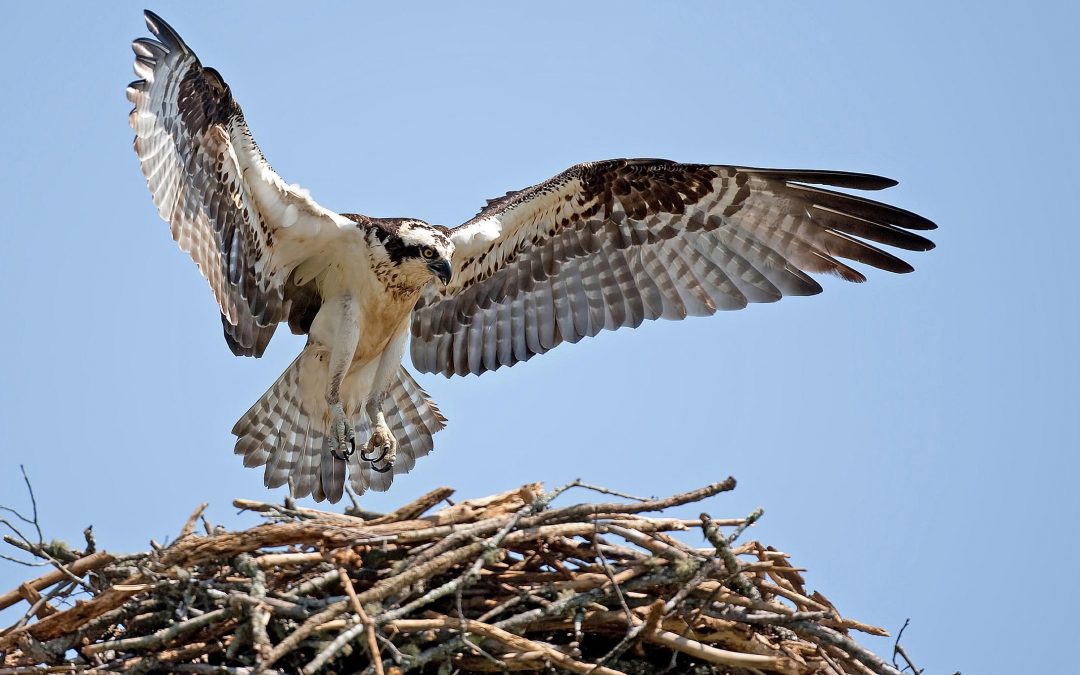 Nearly 20,000 osprey come to nest along the shores of the Chesapeake Bay every spring. This is the largest global concentration of osprey, but it hasn’t always been so. Osprey populations saw a catastrophic decline in the 1950s. The culprit? Unregulated pesticides became the silent killers of osprey and other wildlife on a massive scale.

Up until WWII, ospreys were seen in great numbers along the rivers, oceans, and lakes of North America. They were one of the most abundantly widespread hawks. However, when the insecticide DDT, used for military purposes (as a powder to ward lice from soldiers), began to be used commercially as an insecticide on farms and in forests it had a devastating effect on ecosystems. Large amounts of DDT were sprayed over public and private lands to control mosquitos, moths, and other pests. In osprey, the toxin would bioaccumulate from the fish that they ate which would adversely affect their ability to reproduce. The DDT would cause the osprey shells to become thin and result in fewer chicks that survived to hatch. By the mid 1960s, depending on the location, half to two thirds of North American osprey populations had been lost, with the population along the coastline between New York City and Boston having declined by 90 percent.

Thankfully, a biologist and whistleblower by the name of Rachel Carson exposed the dangers of indiscriminate pesticide use in her 1962 book, “Silent Spring.” She wasn’t the originator of all the studies and data that evidenced the harmful effects of pesticides, but she presented the information in such a way that her book became a hit and invoked the compassion of citizens who were witnessing birds, squirrels, and other backyard critters dying in droves from the poison. Within a year, Carson testified before a Senate subcommittee on pesticides and her arguments and conclusions influenced environmental awareness in a way similar to Henry David Thoreau’s 1854 book, “Walden Pond.” DDT production and sales began to wane thereafter, but it wasn’t officially banned domestically until 1972. American companies continued to export DDT internationally until the mid-1980s. China only halted its production of DDT in 2007.

As the environmental contaminants were removed from the scene, osprey faced another challenge: habitat loss at the hands of development had resulted in fewer nesting sites along the coastal regions. Concerned citizens began to erect pole nests, such as we see on the channel markers in our waterways, throughout the 1970s and ‘80s. The osprey adapted marvelously to the artificial nesting sites and even began colonizing the likes of power lines and satellite towers. Osprey have shown great resilience and are now boasting their greatest numbers in history.

I am always thrilled to see the resident osprey pairs return to nest each spring. I like to view a certain pair that nests where I keep my boat at Easton Point. It is such a wondrous sight to view an osprey, perched high in a tree, dart down to the water to catch a fish he has spied from afar. Their vision, their speed, their accuracy are marvels of creation that I take much delight in, as I do in the serene beauty of the Chesapeake Bay and its waterways.

I last wrote about the osprey in my April 2015 Bay Matters article, detailing the migration pattern of four local osprey that winter in Cuba and Suriname, which are tracked by the Chesapeake Bay Foundation. The osprey, among many other species, rely on healthy waterways for their survival. As spring nears, and our thoughts turn to gardening and preparing our lawns, please be sure to follow the required guidelines for fertilizer use and monitor your property for runoff. Let us continue to be concerned citizens that advocate for the health of our environment, so that osprey and other resident species can thrive.