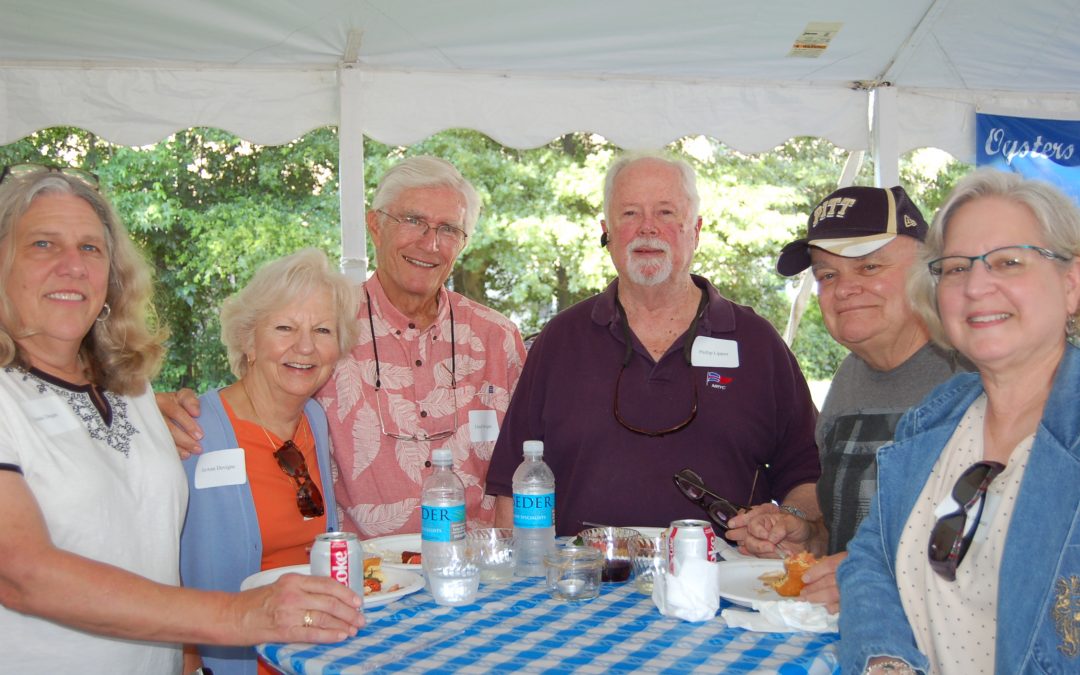 The threat of rain couldn’t stop 106 guests of The Chesapeake Bay Oyster Reef Recovery Initiative (ORRI) from gathering together to celebrate another successful growing season at the 8thAnnual Oyster Social. The event was held on Thursday, June 13 at the offices of founding sponsor, Eglseder Wealth Management Group, Inc., (EWMG) in Easton.

The theme of the event was a throwback to the former abundance of the Bay, “How It Used to Be…” in the style of a classic Eastern Shore backyard barbeque, complete with burgers, hot dogs, all the fixings, gingham tablecloths and abundant drinks. Normally, some EWMG clients bring their beautiful classic cars to complement the theme but, with rain on the horizon, the cars remained garaged.

Oysters-on-the-half-shell were served by Fisherman’s Daughter, an oyster aquaculture endeavor founded by Kelly Cox, who serves as Co-Chairman for the state of Maryland’s Oyster Advisory Commission along with Scott Eglseder, EWMG President. Fisherman’s Daughter brand and its parent organization Phillips Wharf Environmental Center (PWEC) are a local non-profit charged with promoting education and stewardship for the Chesapeake Bay. All proceeds from the sales of their oysters help fund education and aquaculture training programs for a sustainable future for the Bay and its many working watermen. They sell oysters as well as cater events, all for a great price.

Also in attendance was Wayne Witzke of the Oyster Recovery Partnership (ORP). Witzke is responsible for delivering the oyster spat-on-shell to ORRI each fall in order to fill over 1,000 cages for their 319 oyster growers. On Friday, May 31, sixty-nine volunteers assisted ORRI in picking up juvenile oysters that had been cared for since the fall and delivered them to Easton Point Marina.  From there, waterman Robert Crow hauled the oysters to be planted on a state-designated sanctuary on the Tred Avon River. This year, ORRI was proud to announce that they planted 690,000 oysters, beating their best year on record by 159%.

ORRI was formed in 2011 when Eglseder decided that he wanted to join restoration efforts to help rehabilitate oyster populations in the Bay to their former levels. He used resources from his company EWMG to begin ORRI and started coordinating for the Marylanders Grow Oysters (MGO) program. ORRI began with only 11 growers and has now become the largest grower of oysters for restoration purposes in the state of Maryland, thanks to the dedicated efforts of volunteers who grow the oysters off their docks and help to deliver and pick them up each year.

Guests at the Oyster Social celebrated the success of the oyster growing season and had an opportunity to pose questions to Cox, who is PWEC’s Executive Director and Founder, and is very knowledgeable about all things oyster-related. The evening concluded with authentic Smith Island Cake. Minutes after the last guest left and all the equipment was cleaned up, the sky opened up with rain, just like at many backyard barbeques.